The 2015 line up of concerts and gigs in the Concert Hall has been confirmed!  With a mix of original music and fantastic tribute acts, and musical styles including rock, soul, country and folk, there’s sure to be something to suit everyone.  The St Ives Guildhall Whats On listing is out now!

It’s always recommended to book tickets for events in advance to avoid disappointment, but for most events there are usually some remaining tickets available on the door.

Tickets to paid concerts are available from the Visit St Ives Information Centre based at the Guildhall, or online from the Cornish Riviera Box Office.

The Bohemians – A Night of Queen  will be performing on Saturday 8th August. Established in 1996, this superb tribute act,  re-enact the glory days of Queen including the craziness of the 70’s and the Magic of the 80’s.  They really are proving themselves to be the most exciting and dynamic Queen Tribute Band currently touring.

The 24th August sees the welcome return of the singer songwriter Chris Bannister, who will be paying tribute to the late, great John Denver in his live show, playing all of his greatest songs.

We are very excited to announce that Bajaly Suso will be performing, for the very first time, at the Guildhall on the 25th August 2015 at 7.30pm.

Bajaly comes from a Gambian family who have passed down the tradition of musicianship through many generations.  He is related to past masters, Jali Nyama Suso and Foday Musa Suso.  He has been playing and singing the traditional songs of the Gambia for almost 20 years.  Dressed in traditional robes, singing ancient songs and telling folk tales of his native land, Bajaly is part of the legacy of ancient Africa.  He has a haunting, plaintive voice and prodigious technique on his unique instrument.   Not to be missed!   Tickets cost £12 per adult and £10 per child.

The wonderful Squashbox Theatre Company will be performing ‘Skillywidden ‘on the 29 August 2015 at 2.30pm.

‘Skillywidden’  is a celebration of the wildlife and faery myths of Cornwall, using Squashbox Theatre’s distinctive mix of puppets, songs and storytelling and cabaret, with a strong environmental message.  More crazy characters, more silly slapstick, more tall tales and more fantastic facts!”  Perfect entertainment for children aged 4 + and their families! 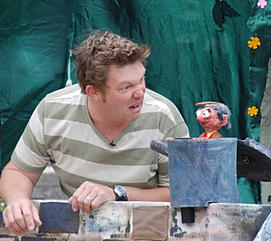 12th September sees the return of the excellent Show of Hands & Miranda Sykes – who are on their 2015 Autumn Concert Tour.

Johnny Cowling, who is fast becoming Cornwall’s premier entertainer, takes to the stage on the 13th September.

Funny man Johnny Cowling has been delighting audiences for over 10 years. His Cornish charm and quick wit make him an obvious choice of entertainment for his vocal talent and humour.  Come along and witness this true entertainer – guaranteed to have you in stitches!!

Dervish - one of the greatest bands ever to have come out of Ireland and now celebrating 25 years together – will also be performing on Tuesday 15th September.  Don’t miss your chance to witness Celtic Music at its best!  Kate Rusby  takes to the stage on Thursday 17th September – a show definitely not to be missed!  “Everybody loves and respects Kate Rusby, not just for her lovely voice, but for the way she has moved folk forward while remaining true to tradition….” Sunday Times.

Acoustic Strawbs, supported by ‘Boundless Brothers‘ will be performing on Friday 18th September, followed by ‘JohnLees’ Barclay James Harvest‘ on Saturday 19th September and then Chris Jagger and The Kronies on Sunday 20th September. The Martin Barre Band (Jethro Tull) will be in concert  on Monday 21st September and finally, The Rollin Clones on Tuesday 22 September.  More details of these acts to follow soon!

Every week at the Guildhall: